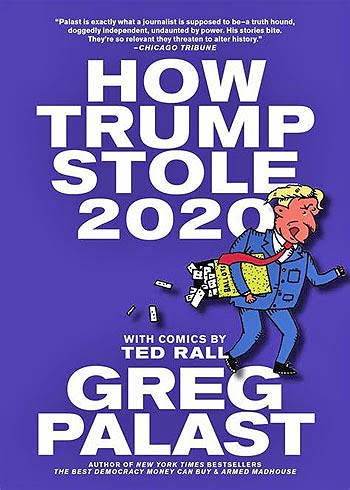 The hunt for America’s vanished voters, by Greg Palast.

Greg Palast is an investigative reporter for Rolling Stone, The Guardian, and Democracy Now! In his new book, How Trump Stole 2020, he engages in a hunt for the vanished voters of Trump’s America.

Among the assertions Palast makes are:

In How Trump Stole 2020, Palast introduces readers to the “scamps, scoundrels, and grifters” (i.e., governors) who have been doing the dirty work of suppressing and disenfranching voters of color. Among them: Governor Brian Kemp (R-GA), whom Palast confronts at a barbecue joint. When Palast asks Kemp if he’s deliberately wiping away Black voter registrations to steal the election, he is arrested.

Palast also includes an exclusive interview with Stacey Abrams—who ran against Kemp under a system where Kemp, then Secretary of State of Georgia, was in charge of supervising the elections. Abrams lost, but has never conceded, as she (and hundreds of thousands of others) believe Kemp gained office by vote thievery.

Chris Hedges, himself a Pulitzer Prize-winning journalist, calls Palast “one of our great investigative reporters. If you are not outraged by what Palast has uncovered, you have no heart.” He calls the book “a searing indictment of our rigged electoral system.”

That view is echoed by Black Voters Matter head LaTosha Brown, who says, “Palast’s work is invaluable for our community.” And in the words of Civil Rights legend Rev. Jesse Jackson, “No one has told our story of our missing voters like Greg Palast.”

Art Exhibition by Joseph A. Pearson